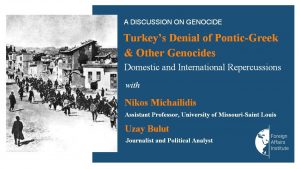 Foreign Affairs Institute hosted an online discussion on Turkey’s denial of Pontic-Greek and other genocides, focusing on domestic and international repercussions.

The discussion was conducted in English between Ms. Uzay Bulut, journalist and political analyst, and Professor Nikos Michailidis, University of Missouri-Saint Louis.

The discussion can be watched by anyone, HERE: https://youtu.be/-C5GLq3bUXw

Some minutes of the discussion are the following:

-«It is the conviction of the International Association of Genocide Scholars that the Ottoman campaign against Christian minorities of the Empire between 1914 and 1923 constituted genocide against Armenians, Assyrians, and Pontian and Anatolian Greeks.» It «calls upon the government of Turkey to acknowledge the genocides against these populations, to issue a formal apology, and to take prompt and meaningful steps toward restitution». Resolution by International Association of Genocide Scholars, December 16, 2007.

-«While this brutal history is most widely known in the case of the Armenian Genocide, few today appreciate the extent to which the fate of the Empire’s Assyrian and Greek subjects was intertwined with that of the Armenians».
Genocide in the Ottoman Empire: Armenians, Assyrians, and Greeks, 1913-1923.Edited by George N. Shirinian. New York and Oxford: Berghahn Books, 2017.

-The genocide of Greeks by Turkey continues today through

-The genocide scholar, Dr. Gregory Stanton, writes that there are eight stages of genocide: Classification, symbolization, dehumanization, organization, polarization, preparation, and denial: «[Denial] is actually a continuation of the genocide, because it is a continuing attempt to destroy the victim group psychologically and culturally, to deny its members even the memory of the murders of their relatives».

-The Turkish government has for decades denied that the Greek genocide ever occurred. Government officials even condemn Greek officials when they mention the genocide or erect a monument to commemorate it.

-There are three main elements of denial: the facts, the responsibility, and the applicability of the crime of «genocide» to whatever happened. Lately, a new theme, offering yet another logical possibility in the denial of genocide, has gained traction: trivialization and relativization. This creates many new opportunities for denial arguments. There could be a moral equivalency argument: both sides engaged in genocide. Hence, it is concluded there were no victims or perpetrators. Universalizing the guilt means that no one was guilty.

-The denialist mentality in Turkey portrays the genocide victims as genocide perpetrators: They were plunderers, murderers, rapists and unlawful gang members. The perpetrators of genocide, however, were the real victims who just tried to defend themselves.

-The Turkish media is also in a perpetual state of denial about the Greek genocide. There are, however, two scenarios when coverage is certain:

In all such coverage in both the mainstream and local Turkish media, the news reports or columns accuse Greece or other Western states of plotting against Turkey through its efforts of spreading lies and propaganda about the «so-called Greek or Pontian Greek genocide».

-Turkish history textbooks claim that «Anatolian Greeks and Armenians established harmful organizations during the Turkish war of independence,» which led Turks to act against them in self-defense.

-Narrative One: «We Did Not Slaughter them; They Slaughtered Us»

According to this narrative, the Greeks, Armenians and Assyrians were not victims of Turkish persecution. Instead, Turks are taught that these people were murderers, rapists and plunderers. They cooperated with the imperialists to divide and destroy Ottoman Turkey, the fatherland of the Turks. That is why the «oppressed» Turks had to deal with the «troublemakers.»

-Narrative Two: «Yes, We Did Slaughter them. If They Do Not Behave, We Will Slaughter Them Again»

This narrative is similar to the first one but takes it to a new level: to something to be proud of, and additional threats against genocide victims and other minorities. This sentiment is also openly and frequently expressed across Turkey.

This narrative proudly accepts that Turks slaughtered Greeks and Armenians, but they have an excuse: «Yes, we did exterminate them. But ask us why. Because they misbehaved and became traitors. And, if required, we will do it all over again.»

-Narrative Three: «A Tragedy Happened During World War I. They Slaughtered Us, and We Slaughtered Them. It Was a War. Let’s Forget About It…»

This is the narrative Turkey uses for international observers. On April 24, 2015, for example, a message was sent by Turkish President Recep Tayyip Erdoğan to the religious ceremony held in the Armenian Patriarchate of Istanbul on the 100th anniversary of the genocide. It said, in part:

«I commemorate with compassion and respect all the Ottoman citizens, regardless of their ethnic and religious identity, who lost their lives under similar conditions during this war.»

In essence, what this message declares is this: «What happened in 1915 was never genocide. People kill each other in all wars. But we still remember all of the dead, so let’s forget about it and move on already.»

This third narrative, which is more «moderate» compared with the first and second ones, is just intended for the outside world and particularly for the West.

-Abuse, seizures or appropriation of Greek properties: Greek churches across Turkey are still being turned into mosques, stables, museums, and other facilities. A recent victim is the historic Greek church in the city of Trabzon.

-The Hagia Sophia Greek Church in Trabzon was built as a church in the 13th century. It was converted to a mosque during the Ottoman rule. It was opened as a museum in 1964, and then was converted back to a mosque in 2013.

«Christian symbols in the church have been damaged or destroyed. Nails have been pounded into the walls in order to hang curtains inside the new “mosque” to create a separate section for women. The frescos on the ceiling have been veiled with wooden curtains and the mosaics on the floors have been covered with a carpet. Some walls have been painted green.»

-Researcher Ayhan Aktar studied records in the (now closed to researchers) Deeds and Records Halls (Tapu İdaresi) for the Istanbul districts of Beyoğlu-Şişli, Eminönü, Fatih, Kadıköy, and the Marmara Islands. «In 1922, the National Turkish Trade Association was founded to determine which businesses were Turkish. The association discovered that 97% of the import-export trade in Istanbul, and all shops, stores, restaurants, and entertainment centers in Beyoğlu, were owned by minorities. This survey was a precursor to actions taken with the aim of Turkifying the city’s economy.» (Ayhan Aktar, Wealth Tax and Policies of ‘Turkification’, Istanbul: İletişim, 2000 as quoted by scholar Amy Mills, in her 2010 book, Streets of Memory: Landscape, Tolerance, and National Identity in Istanbul._