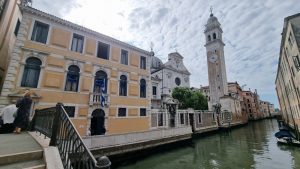 The International Scientific Conference on “Islamizations During the Period of the Ottoman Empire”, organized by the Hellenic Institute of Venice, the Foreign Affairs Institute, the National and Kapodistrian University [“Church and Culture” laboratory of the Theological School], and the famous Scuola Grande di San Marco, was successfully held on May 19-21 in Venice, Italy.

The conference was held under the auspices of the General Secretariat of Hellenes Abroad and Public Diplomacy of the Ministry of Foreign Affairs.

The phenomenon of Islamism was examined in the context of the relations of the Christian world with Islam.

In the keynote address of the conference entitled “The history of the phenomenon of Islamization in the Ottoman Empire” Professor of the Department of Theology at the Aristotle University of Thessaloniki, Fotios Ioannidis, fully defined the historical context of the phenomenon with its theological, political, and social dimensions.

Islamization was presented as a practice adopted by the Ottoman administration gradually throughout the enslaved territory.

Chronologically until the key battle of Matzikert in the 11th century, the spirit of tolerance in the coexistence of Christians and Muslims in the eastern Byzantine territory based on state law, was pointed out by the historian Frederic Lauritzen of the Scuola Grande di San Marco. Then, there was a description of the intensity of the phenomenon during the 15th-19th c., and of the political-military character of Islam which emerged with the expansion of Ottoman rule.

Regarding the geographical spread of the phenomenon, the references were on a wide range of Ottoman territory. 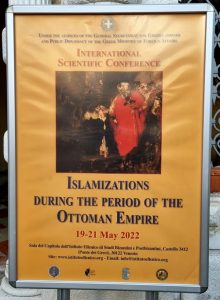 The Associate Professor of Democritus University Ioannis Bakirtzis presented in detail the “Contribution of heterodox Islam to the conquest and consolidation of Ottoman rule in Western Thrace, from the end of the 14th century onwards.”

The emeritus professor of History of A.U.Th. Michael Tritos, offered a panorama of “Islamizations in Epirus and Albania”˙ Dr. of Slavic History and member of the EDIP of the Aristotle University of Thessaloniki, Athanasios Athanasiadis, made special reference to the thorny issue of Islamization in the Western Balkans and the distinction between the terms “Islamization” and “spread of Islam”.

The philologist and PhD candidate, Georgia Christodoulou, focused on the role of dervishes in the Islamization of Christian populations in Asia Minor with reference to Pontus and Cappadocia.

The phenomenon of Islamization was investigated for its a) causes and b) tactics and methods.

Particularly enlightening was the presentation of the professor of Salem University, USA, Alexandros Kyros, who spoke about “Islamization of Christians under Ottoman rule: and the deconstruction of the historiography of “tolerance” and analyzed the strategy of the mass kidnapping of Christian children by the Ottomans.

Paul Sant-Cassia, Professor of Anthropology at the University of Malta, spoke about Crypto-Christianity, Marriage Strategies, and Fuzzy Boundaries in Cyprus, considering intermarriage as a religious survival tactics.

An interesting reference was made to the supposedly heretical communities of Ezidi and Kizilbas by Mrs. Zeynep Turkyilmaz, University of Potsdam.

Respectively, Researcher Axel Corlu, PhD, pointed out the tactics regarding the symbolism and the use of monuments in the context of the Ottoman conquest policy, referring to the example of St. Sofia of Constantinople.

Religious synchronicity has been referred to as the framework of Islam by most speakers.

Particular analyses were presented on the phenomenon of Islamization in connection with national and religious identity and consciousness: Stefanos Mytilineos, Diplomatic Writer and Geopolitical Analyst, in speaking about the “phenomenon of Islamization in Greece during the Ottoman Empire”, referred to historical testimonies according to which the Islamized were treated as Turks, while the same people, while Greek speaking and bearing Greek names were declaring to their compatriots their Greek origin.

At the same time, crypto-Christianity demonstrates the preservation of religious identity despite the apparent defection.

In describing his family history, Political Science and International Relations researcher Mert Kaya, originally from Amasia, Pontus, concludes that Greeks still live in the area (in Pontus) even after the population exchange [“Greeks are still here”].

Nikos Michailidis, Associate Professor at the University of Missouri referred to the typical case of the Greeks of Trabzon.

Extensive reports were made about the resistance to Islam in the form of the martyrdom of the New Martyrs, in the martyrdom laboratories of Mount Athos and not only, and with the assistance of personalities who contributed to it, such as Nektarios Terpos, Kosmas Aetolos, Sofianos Dryinoupoleos, according to the analysis of the emeritus professor AUTh Michael Tritos, and Grigorios V, in whose key contribution focused on the professor of Slavology in the University of Macedonia, Konstantinos Nichoritis. 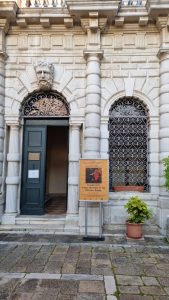 Professor of AUTh Evangelia Amoridou, in her presentation on “Islamizations: political act, personal choice” explored the concept of religious conversion, while noting that the issue of justification of martyrdom as a personal choice is still open.

Professor of Social Theology and Christian Culture in AUTh, Symeon Paschalidis, presented the course of Islamizations, the meaning of the New Martyr, as well as the problematic for attending the martyrdom of the atheists.

Assistant professor of the Department. Of Theology in AUTh, Thomai Houvardas, presented the theological view of death as resistance to the spiritual alienation of Islam.

Finally, a special section was dedicated to anti-Islamic literature.

Professor Christos Arambatzis of Aristotle University of Thessaloniki referred to the surnamed and anonymous texts and their restraining role in Islamizations, while Dr. Aspasia Kaloudi presented K. Daponte’s work, “Prison’s Praise” as an expression of literary resistance to the phenomenon of Islamization.

From all the above it becomes clear that for the examination of the various aspects of the phenomenon of Islamization the views of scientists from different specialties, nationalities: historians, anthropologists, theologians, political scientists, Slavologists. Were very contributing. The need to examine Ottoman and Greek sources for further documentation of the phenomenon was pointed out.

The timeliness of the conference theme in relation to contemporary reality was underscored by all speakers.

Characteristic was the intervention of the Deputy Foreign Minister, Andreas Katsaniotis, who praised the very important work of the Hellenic Institute of Venice and stated that he strongly supports it.

The conference proceedings can be viewed by anyone in the Venice Institute’s YouTube channel, here: